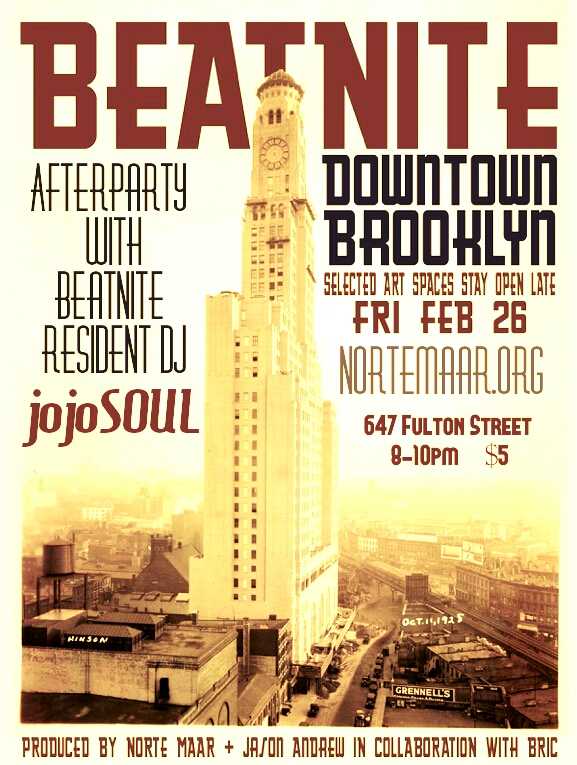 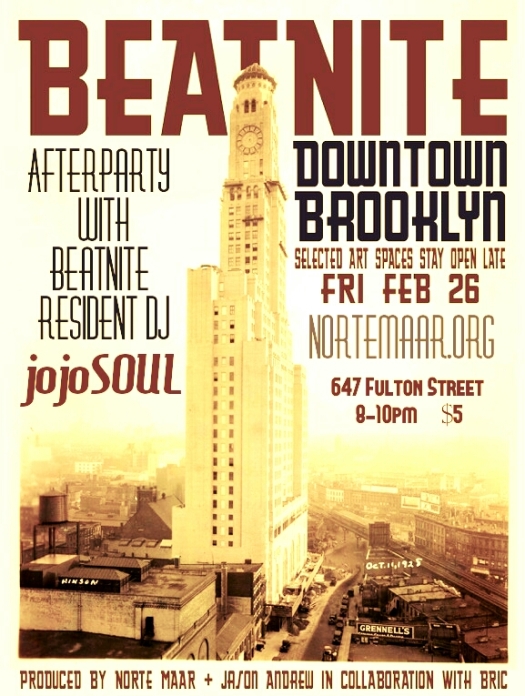 This program is supported, in part, by public funds from the New York City Department of Cultural Affairs in partnership with the City Council

Beat Nite Downtown will be held on Friday, February 26, 6-8pm and is presented in collaboration with BRIC. Beat Nite began in 2009 and has continued as a bi-annual event organized by curator Jason Andrew and has been recognized for putting the Bushwick art scene on the map.

__________
About Beat Nite:
Beat Nite made its neighborhood debut inFebruary 2009, featuring all of Bushwick’s alternative art spaces and galleries—at the time, only seven. The event grew into a biannual occurrence offering an awesome neighborhood-wide event that many have labeled “half art stroll, half bar crawl.” With over 50 galleries and alternative spaces now in Bushwick/Ridgewood, beginning in 2012 a special guest curator was invited to select spaces from the community’s many great offerings. In the fall of 2015, Norte Maar launched a new initiative with the Beat Niteprogram to feature new emerging artistic communities in Brooklyn and beyond.

About BRIC:
BRIC is the leading presenter of free cultural programming in Brooklyn, and one of the largest in New York City. We present and incubate work by artists and media-makers who reflect the diversity that surrounds us. BRIC programs reach hundreds of thousands of people each year. Our main venue, BRIC Arts | Media House, offers a public media center, a major contemporary art exhibition space, two performance spaces, a glass-walled TV studio, and artist work spaces. Some of BRIC’s most acclaimed programs include the BRIC Celebrate Brooklyn! Festival in Prospect Park, several path-breaking public access media initiatives, including the newly-renamed BRIC TV, and a renowned contemporary art exhibition series. BRIC also offers education and other vital programs at BRIC House and throughout Brooklyn. In addition to making cultural programming genuinely accessible, BRIC is dedicated to providing substantial support to artists and media makers in their efforts to develop work and reach new audiences. BRIC is unusual in both presenting exceptional cultural experiences and nurturing individual expression. This dual commitment enables us to most effectively reflect New York City’s innate cultural richness and diversity.